This is my first ever attempt at making a giant cupcake. My sister-in-law gave me a silicone mould last Christmas and her birthday in March provided the perfect opportunity to make a giant cupcake birthday cake. When my sister-in-law gave me the mould, she did so saying “I don’t know if it’s any good but it is only a stocking filler”; her proviso means there’s no problem with me revealing the reviews I found online. Frankly, the reviews on the web were not favourable towards the silicone mould I’d received. Conplaints included the mould going out of shape, sponges sticking and some finished cakes tasting disgusting due to the material the mould was made from.

So with such poor reports in mind, I needed an alternative plan. I decided on a chocolate shell, with chocolate icing which would hide a multitude of sins. Anyone who knows me, knows I don’t do piping and steer clear of it as much as I can. Janie over at Hedge Combers made me feel so much better when she declared she had broken her piping bag, at least I’m not the only one !

I wanted a very simple but effective decoration so I was relieved to find some beautiful white chocolate flower decorations on YouTube. They only required the piping of small white chocolate blobs on pieces of baking paper. It sounded right up my street: a polythene food bag with the corner snipped off, filled with white chocolate and off you go – simple and easy piping. Well, after two split bags and wasted white chocolate, I decided to use a spoon instead. Although, the white flowers are not so elegant as the flowers on YouTube, I was pleased with the results.

The day before you make your sponge, start your chocolate shell.
Melt your chocolate. I melt mine in the microwave with thirty second bursts and a stir in between. I stop when I can still see very small pieces of chocolate and then I continue to stir until all the chocolate has completely melted.
If you prefer, use the bowl over hot water method to melt your chocolate.
Paint the first layer of chocolate on the inside of your cupcake base mould, ensuring it is well covered.
Wait for it to set before applying two more coats.
Gently reheat the melted chocolate before applying each layer to your mould.

I placed the shell in the fridge to set but this does take the shine off your finished shell, so if you have time, let it set in a cool place.
When completely set, carefully peel off your mould. This was very easy to do as my chocolate shell was fairly thick.

To make your sponge:

Grease the inside of both halves of your cupcake mould – I would recommend using cake release and a good quality mould after my experience.
Make your sponge mixture and fill your moulds to no more than the three quarters full or to the line recommended on your mould.
Bake in the oven for approximately one hour until the sponges are cooked, they should feel springy to the touch and leave no fingerprint.
Remove from the oven and leave to cool in the mould for 5 to 10 minutes before turning out the sponges.

To make your chocolate fudge icing:

Melt the butter and milk together – I usually do this in the microwave for about 1 minute.
If you are using the optional chocolate squares, add them to the melted butter and milk, the heat of which should melt the chocolate. If it doesn’t, put the mixture in the microwave for 10 to 20 seconds. Be careful – it is very easy to overcook chocolate and ruin your icing.
Sift cocoa powder and icing sugar to the above and beat. An electric mixer makes the job easier.

To assemble the cupcake:

Slice the base of the cupcakes sponge into two layers – place the bottom layer inside the chocolate shell. Although the sponge will be slightly bigger than the shell, gently ease it in and then spread on a layer of chocolate fudge icing.
Carefully place your second layer of sponge into the chocolate shell. Cut away any excess sponge – cook’s perk.
Spread fudge icing on the top of the second sponge layer before placing on the dome shaped sponge to complete your cup cake shape.
Brush the top of your cake with warmed apricot jam – a very good tip from Mary Berry to prevent the sponge from crumbling into your icing.
If necessary, warm the fudge icing for 10 to 20 seconds in the microwave to make it easier to spread.
Cover the dome of the cake with icing, letting it drip slightly over the edge of the chocolate shell if you want.

Writing the instructions for the chocolate petals is really quite difficult so make sure you look at the photos in this post – or you could even search YouTube. Whatever the shape of your finished chocolate flowers, they will look impressive.

Make sure you have plenty of strips of baking paper, approximately 5 cm x 35 cm (2 ins x 14 ins)
Melt the white chocolate in 30 second bursts in the microwave in the same way as you did before, take care not to overheat as white chocolate tends to burn quicker.

The flowers consist of 3 different shapes:

Place a strip of baking paper on your worktop and drop “blobs” of melted chocolate – leave plenty of space between each chocolate work of art.
Place another strip of paper directly on top.
Shape the chocolate with your finger to form big fat petals. Squash the chocolate fairly thin but be careful not to go too thin or your petal will break.
Peel apart the two strips of paper – you will now have two strips of thin petal shaped chocolate.
Take each paper strip and place over a rolling pin – you may want to use tape to secure the paper.
Leave to set before carefully peeling off your petals.

Spoon a circle of chocolate onto the strip of paper as above, this time elongate the circles with the spoon before you place the paper on top.
Place a strip of paper on top and shape the petals, working upwards instead of across.
Peel the strips apart and place on rolling pins as before.

Shape as petal two but this time instead of placing on the rolling pin, place another strip of paper onto the top of your thin petals and roll up into a tube. Secure with tape and leave to set.

To assemble the flowers

To finish your giant cupcake, carefully place your flowers into the fudge icing et voila.
It’s a good idea to make extra petals if, like me, you are clumsy and all but guaranteed to break a few.
Don’t worry too much about the petal shapes – you can get away with some quite miss shaped petals as you can see from the photos.

I wouldn’t recommend using a cheap silicone mould to bake with – I have a tin mould on my wish list. 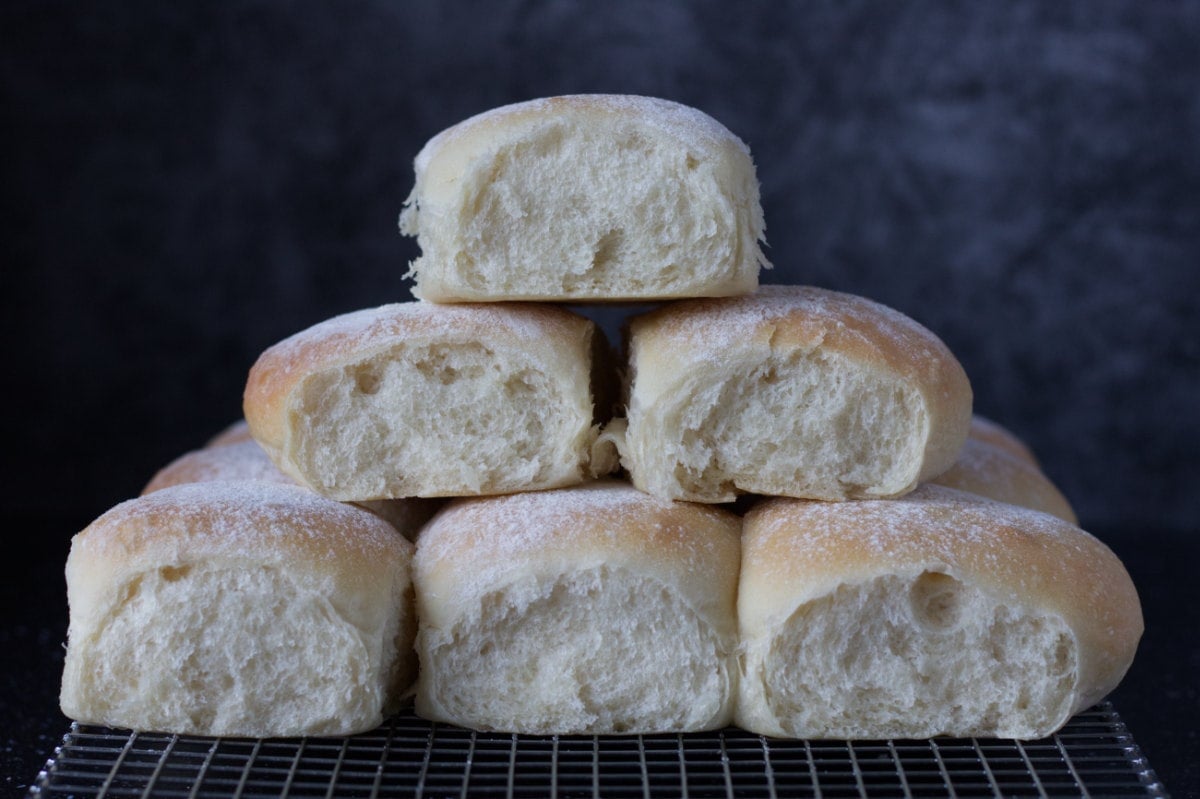 Pillowy Soft Bread Rolls with pull apart edges, guaranteed soft & fluffy every time. With easy step by step instructions! Those of you who follow me on Twitter will already have seen photos of these soft bread rolls, with some people requesting the recipe on […] 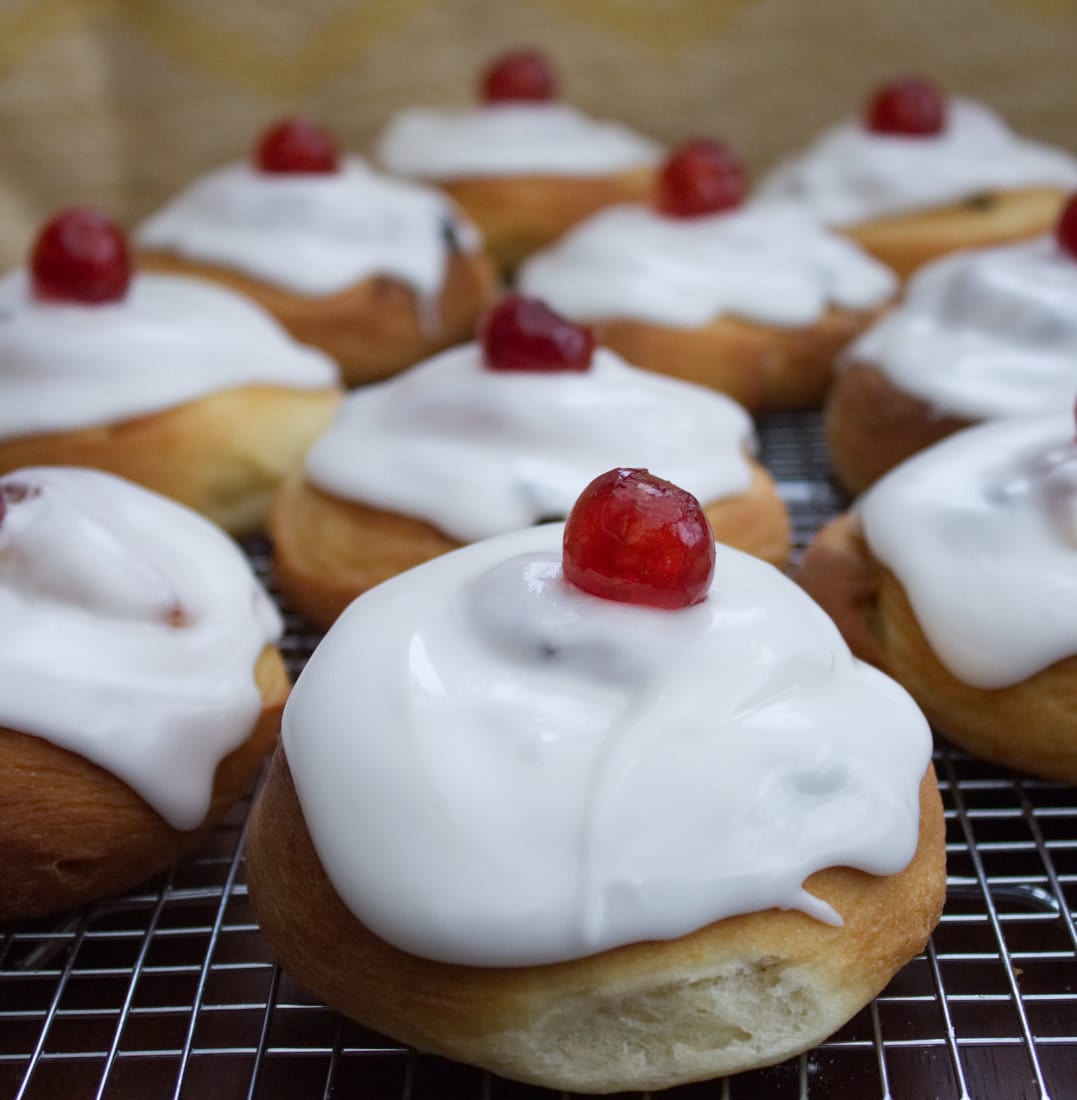 Homemade Belgian Buns – nothing beats a freshly baked iced bun with a cherry on the top. Filled with homemade Lemon Curd & juicy sultanas – so much better than Greggs! One of my favourite treats when I go to a cafe or a bakery […]

Hi, I'm Sarah and welcome to my blog. I share my time between the UK (my home town is in the Midlands) and a tiny hamlet in Southern Brittany. Sharing my favourite bakes, cakes and seasonal recipes from the Kitchen Shed ... Read More

Any cookies that may not be particularly necessary for the website to function and is used specifically to collect user personal data via analytics, ads, other embedded contents are termed as non-necessary cookies. It is mandatory to procure user consent prior to running these cookies on your website.