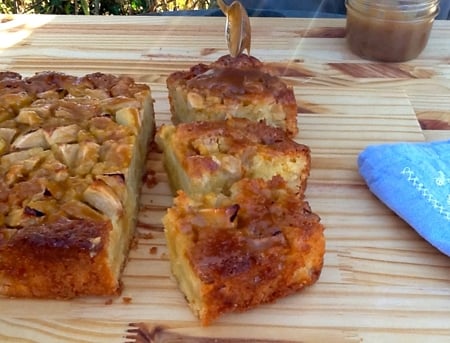 Apple harvest time again and luckily our tree here at the kitchen shed is laden down with fruit just in time for making my take on the traditional Guernsey Gâche Melée which has been shortlisted for the BBC Good Food Bakes and Cakes Show competition.

I’m excited and nervous at the same time about being shortlisted for the show competition and I’m not quite sure what to expect. Whichever way the day ‘pans’ out, who’d have thought I’d be able to say Eric Lanlard has tasted and judged one of my bakes … and how fantastic would it be to say you’ve had tea with Mary Berry ! Thing is, say I do win, what does one say to Mary Berry during afternoon tea ? I’d love to know what you’d ask her – please leave your suggestions.

If you are going to the show on Saturday it’d be great to meet up – I won’t be wearing my straw hat or be surrounded by sunflowers but my face looks the same (ish). I’ll keep an eye out for any familiar faces.

Gâche Melée (pronounced “Gosh Mellar” by the local Guerns) is a centuries old Guernsey apple suet cake or dessert which is traditionally served cold but I reckon it’s even better served warm with a generous spoonful or two of Guernsey cream.

I first visited Guernsey when I was eighteen (a very long time ago) and I’ve been in love with everything “Guernsey” ever since. Our sons caught the bug too and now they both live and work there.

The recipe I’m using is one I scribbled down over ten years ago and draws on information gleaned from The National Trust of Guernsey and some early internet resources. I’ve tried to keep to the traditional Melée recipe, doubled the ingredient quantities to make a tray bake version and added a French twist to enhance the apple flavours by using Calvados (or Calva as the locals call it) instead of lemon juice. Even then I felt it needed a little something extra to match the traditional Gâche Melée which was cooked for up to three hours for it to become gooey and caramelly. I settled for using a butterscotch sauce to get the gooey loveliness without a three hour bake.

I didn’t have any Guernsey cream, so I served it with crème fraîche plus a little extra butterscotch sauce ! 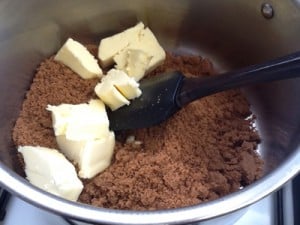 Ren Behan’s Simple and in Season challenge.
Lucy’s Cook Blog Share over at Super Golden Bakes.
Recipe Of the Week over at A Mummy Too and hosted by Emily.
Bake of the Week hosted by Helen over at Casa Costello.

I’m entering Gâche Melée for Lurpak’s Bake Club Challenge as the theme for March is inventive square bakes with a twist.

This month’s theme over at Cooking Around the World is “Great Britain” and since Guernsey is British (but not part of the UK) I thought Gâche Melée meets the criteria.

Love the sound of this boozy cake full of bramley apples! Good luck at the competition:)

Thanks Monika, the calvados does work well with the apples, a perfect match .

[…] this post, I’ve stuck to a traditional Gâche recipe as my Gâche Melée with a twist caused a bit of a stir with some traditionalists. To redress the balance a little come […]

40 Seasonal Recipes (October's Simple and in Season Round Up) - Ren Behan | renbehan.com

[…] Guernsey Gâche Melée by Tales from The Kitchen Shed […]

Quantities here in old money as I don't bake in grams. I've been making this for more than 40 years in Guernsey and regularly win prizes for it in local shows. 1½ lb cooking apples 3 oz granulated sugar 2 oz vegetable suet 4 oz Self Raising flour 1 egg, beaten

Thanks for sharing your recipe.

Sorry but that's nothing like a traditional Gache Melee though it sounds like a nice dessert. The real thing doesn't have butterscotch sauce, that would make it far too sweet. Nor does it have Calva or lemon juice. It is simply cooking apples, peeled cored and roughly chopped, then sprinkled with granulated sugar. You then chop the apples into the sugar with a small sharp knife till the juice runs and creates a syrup. Then add suet and SR four and mix til the apple is coated. Mix the egg through thoroughly, pour the mix into a shallow tin and sprinkle the top with a little demerara sugar and bake til a deep golden brown. Eat and enjoy. A simple farmhouse dish.

Hello Liz, thanks for sharing. My take on Gache Melee came about when I entered the Lurpak Square Bake Challenge where the brief was to provide my own twist on a traditional recipe. I used Calvados to add a French twist and the butterscotch sauce goes so well with the apples ... toffee and apples are always a favourite at the Kitchen Shed. Friends and family have enjoyed the bake and it went on to win the Lurpak Square Bake Challenge.