Homemade Clotted Cream is quick and easy to make. Deliciously decadent served with warm scones and homemade jam for a perfect cream tea.

No oven required, no 12 hours of baking and no leftover whey. You can produce a silky, creamy clotted cream with a delicious golden crust in around an hour using your stovetop.

Rich and thick with the consistency of soft butter, clotted cream is inextricably linked with a Devon or Cornish cream tea and there’s nothing quite like it. I’ll leave it to you to decide whether to load your scone with jam first or home made clotted cream first, either way, the result is divine.

I first tried making clotted cream while I was living in France after I promised our French neighbours an authentic Devon Cream tea. I knew it wouldn’t be easy to get hold of clotted cream and creme fraiche, delicious as it is, just wouldn’t do.

As I was trawling through recipes I came across a stovetop method for making clotted cream in an old WI booklet. The minimal effort of stirring cream for 20 minutes seemed much better than a long, slow cooking of cream in a low oven. After working out the ratio of cream to butter and the quantities, I had a go.

The results were far better than I expected and just as good as the pots I used to buy. A cream tea with homemade scones and jam topped with clotted cream became a regular occasion at the Kitchen Shed. This is the best recipe for homemade clotted cream and has been requested by neighbours and expats alike.

What do you need ?

How to make Homemade Clotted Cream on the stovetop

How long does clotted cream last in the fridge ?

Kept in the fridge in an airtight container it will last for up to 7 days. Once opened use within 3 days.

Can I freeze clotted cream ?

I wouldn’t recommend it. Like most dairy products clotted cream doesn’t fair well in the freezer. The texture is impaired, it becomes crumbly and doesn’t have the same creamy feel in the mouth.

However, it is safe to freeze clotted cream and it can work well for baking. Freeze fresh clotted cream for up to 3 months in an airtight container.

How to serve Homemade Clotted Cream

Serve with freshly baked scones and jam and a pot of tea.

However, clotted cream isn’t just for an afternoon tea. It’s perfect with a pudding or dessert. We love a dollop of clotted cream with our Nectarine Frangipane Tart or an apple pie or crumble. Oh, I nearly forgot – sticky toffee pudding too !

Don’t want to miss a thing ? 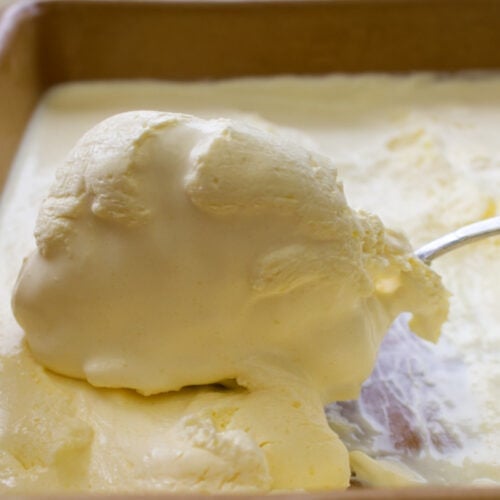