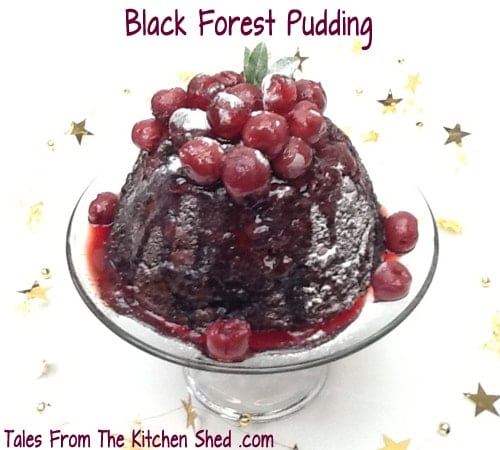 Don’t you find there’s usually someone at the dinner table who doesn’t like traditional Christmas pudding ? Part of my preparations each year is the challenge to serve Christmas pudding and a tasty alternative rather than “Would you like some ice cream instead ?”

This year, with the chocolate and the liqueur soaked cherries in my retro Black Forest Pudding, I might have trouble choosing between traditional pudding and the alternative – perhaps I’ll resort to what some family members do every year and eat a slice of each. My sister and her family have “booked” this pudding for their New Year dinner so I might make an extra one at Christmas and pop it in the freezer as it does freeze well. You can cook this pudding in a steamer or a slow cooker. 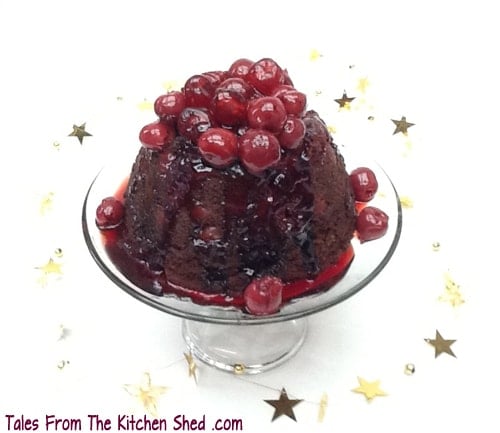 You will also need:

Black Forest Pudding has been linked to:

This sounds incredible! It'd be the perfect dessert this holiday season. Your recipe is easy to follow & clear as always! Thanks so much for sharing with my holiday recipe linky! x

Thanks Becky, always good to get feedback on instructions, you never know whether you're including to many or making them too complicated. A pleasure to link up with your holiday linky x

[…] with something sweet, and Sarah of Tales from the Kitchen Shed is supplying this very festive Black Forest Chocolate Pudding as our finale, this one isn’t just for Christmas, it would make a great Sunday Lunch or […]

26 Seasonal Recipes - Simple and in Season December Round Up - Ren Behan Food | renbehan.com

Delicious – I am not a fan of Christmas pudding so this is a perfect alternative! Thanks for linking to #CookBlogShare - gorgeous photo too. Happy 2015!

Thanks Lucy, always a pleasure to link up with #CookBlogShare. Happy 2015 too.