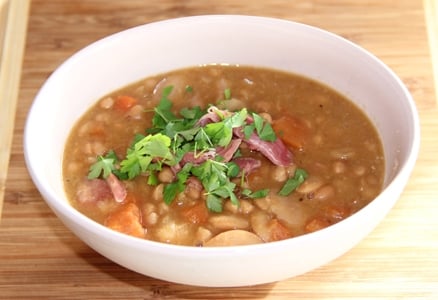 It’s winter, it’s cold, it’s miserable, I could go on but what better way to banish the winter blues than coming home to a hearty, warming and delicious meal ?

Slow cookers, or crock pots, are proving very popular at the moment; there are plenty on sale for less than £20 and with running costs often less than a light bulb, it makes good economic sense. Well, I don’t need converting, I love my slow cooker and this is one of my favourite soup recipes.

Our friend in Guernsey gave me her bean jar recipe over 30 years ago – it was written on a scrap of paper and I still treasure it.
Guernsey Bean Jar is a traditional dish, very simple and depends on slow cooking for its success. Still popular today, Bean Jar is often served as soup of the day in Guernsey restaurants.
Right until the end of the German occupation of Guernsey, bean jars, covered with brown paper and tied up with string and the family name on a label, were taken to a bakery to cook overnight. Since there was no baking on a Sunday, ovens weren’t fired up and the bean jars would cook in the residual heat of the previous day’s baking.
Although almost everyone in Guernsey has a secret family recipe for a bean jar, there is one thing they all have in common: the simpler the better. Bean jar is a cheap and wholesome meal and ingredient variations depended on what was available. Our friend’s recipe uses pork but she has included a note to say shin of beef (or both pork and beef) can be used instead. 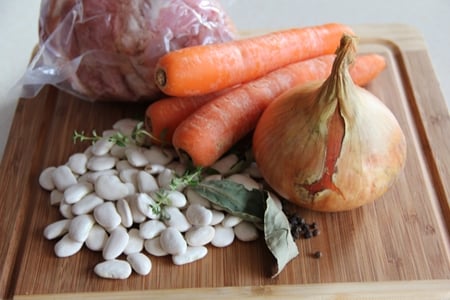 To use dried beans in a slow cooker they must be properly soaked and cooked. Most beans contain varying amounts of a toxin known as kidney bean lectin, red kidney beans having the most. Throwing away the soaking and rinsing water gets rid of leached toxins and boiling the beans for at least 10 minutes with fresh water makes them safe to be added to the slow cooker where they need to be cooked on high setting for the first hour. It’s better to add salt near the end of the cooking time, as salt tends to toughen the bean skins.

REMEMBER: each time you take the lid off your slow cooker, it adds 30 minutes to your cooking time.

Interested in your recipe a d will try it. For my big slow cooker my recipe is 1lb 4oz haricots and 10 oz butter beans, a good pound each of onions and carrots, one pork hock, or shin of beef on the bone plus a couple of belly pork rashers if I can’t get a hock. I use chicken stock (from cubes) for flavour but only add them halfway through because of the salt content to allow the beans to soften first, and add a teaspoon of mixed herbs. I cook it overnight and through most of the following day. I live alone (in Guernsey) so eat on that day, and freeze the rest in portions. Two or three batches get me nicely through the winter, and if anything it’s even better when thawed and microwaved!

Thanks Pam, I love how Bean Jar recipes are slightly different from family to family. It's a good idea to add salt halfway through cooking to allow the beans to soften first. Do you boil the beans up first to get rid of the toxins before you put them in the slow cooker? I like the idea of freezing some for later. Do let me know how you get on.

My grandmother made us Guernsey bean jar when we visited her as a child in the early 70's. I loved it and have tried to make it from memory as an adult. Thank you for posting the recipe. One question though, I don't see the amount of water listed to cook everything in. My mother is in a home now suffering with dementia. I would love to bring some bean jar in to her. It might bring back some memories of her growing up in Guernsey.

Thanks for getting in touch Wendy, the amount of water depends on your slow cooker, it's enough boiling water to cover the meat and beans. This is written in the instructions but I'm glad you brought the question up as it needs to be in the ingredients list too. Sorry to hear your Mum is suffering with dementia but I really hope the Bean Jar brings back memories of Guernsey for her.

[…] comes from the slow cooker pot. A bean stew here at the Kitchen Shed is always popular, and whilst Guernsey Bean Jar is a firm favourite, I wanted to try an equally tasty meat free […]

[…] am so delighted that, my Twitter friend, Sarah managed to make this Slow Cooker Guernsey Bean Jar, based on a traditional recipe given to her by a friend from Guernsey 30 years ago.  Sarah has […]